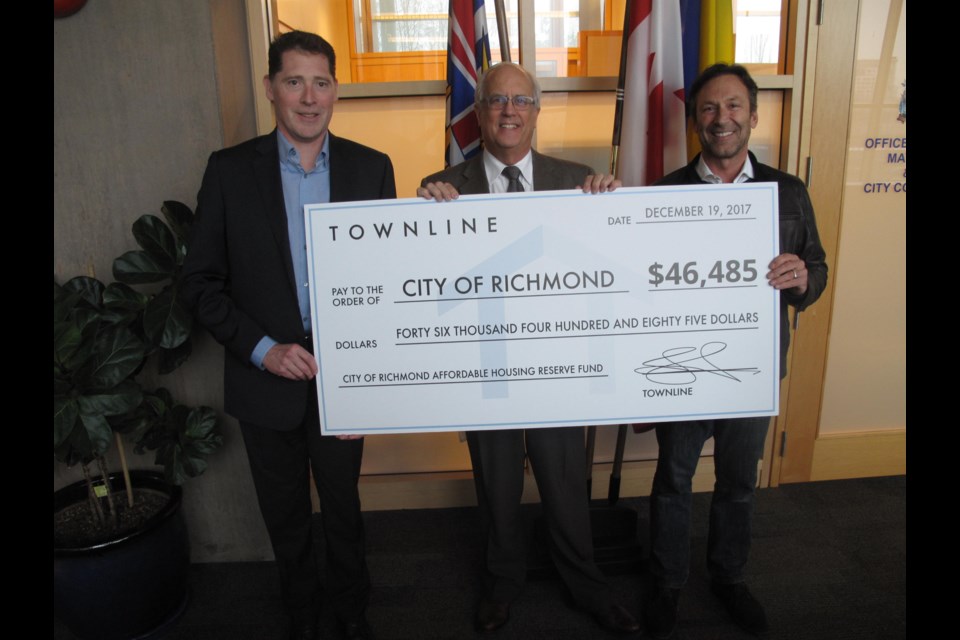 One of Richmond’s most prominent developers, who believes the free market should dictate where people live, announced he is making a significant contribution to the City of Richmond’s reserve account for subsidized, affordable housing.

Rick Ilich, founder and president of Townline Homes, is drawing a line on how his company is to directly profit from speculation, by donating the company’s assignment fees of pre-construction condo sales from Calla at the Gardens, a new development in southeast Richmond.

In total, Ilich is giving $46,485 to the City of Richmond and more is expected to be given to community groups, from future assignment fees.

“I feel these are fees we don’t need to be profiting from,” said Ilich.

Assignment fees are typically charged by developers when a person buys and then sells (assigns) a unit before construction is completed. Pre-construction sales contracts are initially offered to finance developments. But if market rates go up, the buyer can flip the contract and reap the net profits. Since the market is heavily speculative at the moment, numerous flips may occur, thus driving up housing costs.

Ilich explained that Townline charges a 1.5 per cent fee for assignments. He said the fees are meant to discourage flipping.

And, “it is our policy to continue this practice and distribute the assignment fees collected to the community that they were generated in,” said Ilich by email.

Ilich noted there have been five assignments at Calla.

Richmond’s affordable housing reserve is dedicated to providing subsidized housing for low-income people. This year the city increased the contributions it is to charge developers for the reserve, in order to keep up with rising land values.

Calla and its adjacent townhouse development, Jasmine, are advertised as “luxurious indoor and outdoor living.”

This year, at a Richmond Chamber of Commerce event, Ilich weighed in on affordable housing, stating that the solution to affordability may rest with building smaller units.

He also said: “I don’t buy it when people say ‘my family is here, so I have to live here.’ Economics is economics. Some people have to move to other places because that’s where they can afford, which is not necessarily a bad thing.”

When asked to clarify his position on affordable housing, Ilich explained that his biggest issue is with the speculation occurring. He maintained that there is a “sense of entitlement” amongst development critics.

“And entitlement isn’t a word I like,” he said.

“I think it’s a generous gesture. There are lots of people in our community who choose not to make contributions,” said Brodie.

New condo, no money down