Then & Now: The Hudson District 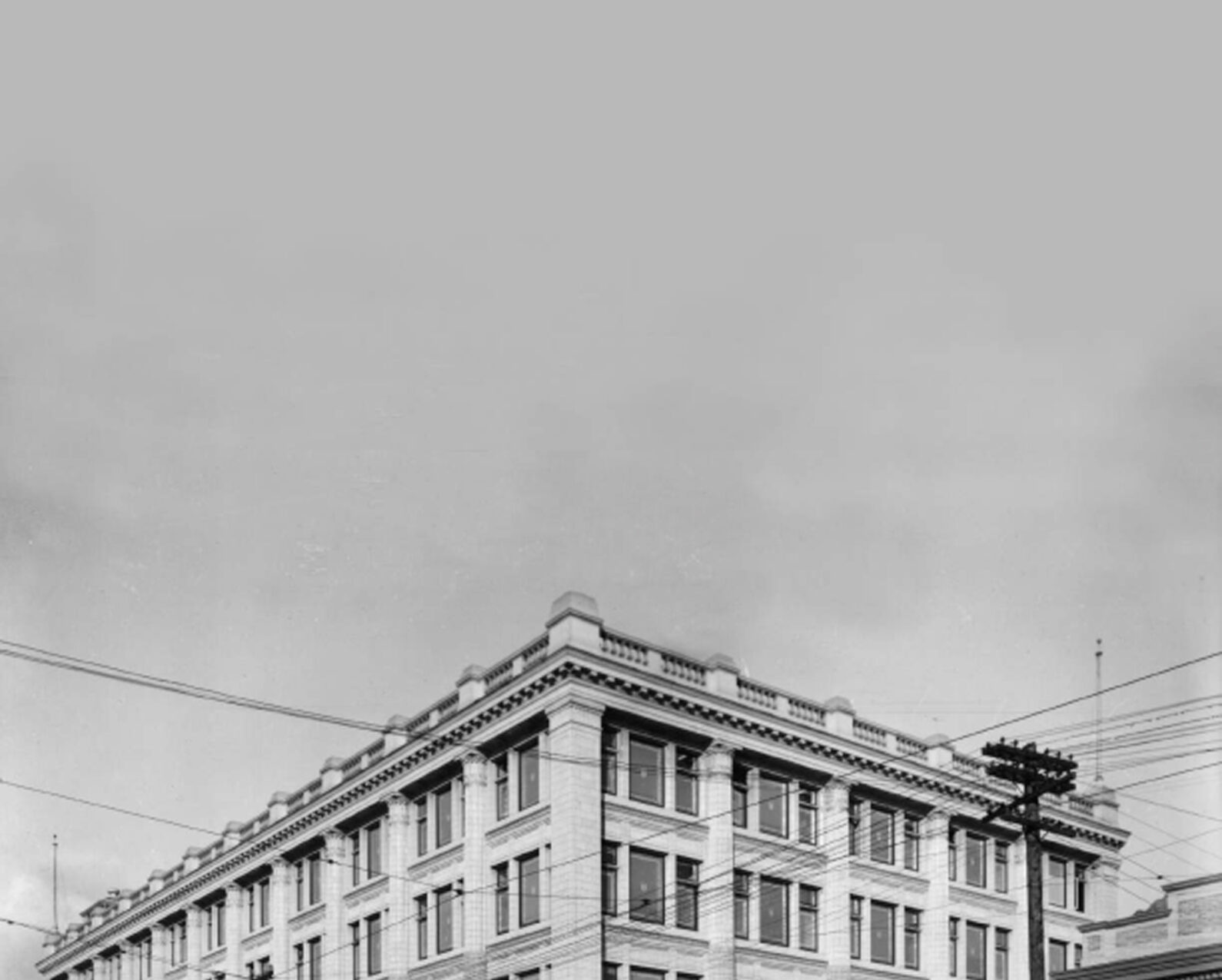 From humble beginnings as the Northern Pacific trade depot of the Hudson’s Bay Company (HBC), modern Victoria has evolved into a vibrant, urban city with a unique, revitalized energy plus an ever-more diverse selection of cultural amenities. At Townline, we’re thrilled to play a role in the City’s evolution through our growing Hudson District because we believe heritage values should be embraced and celebrated.

From the Fur Trade

In 1843, James Douglas established the HBC trading post that would become known as Fort Victoria in honour of Queen Victoria. Located where the Empress Hotel now stands, Fort Victoria was home to 50 residents by 1858, but it would be another decade before the Vancouver Island town replaced New Westminster as the Capital of British Columbia in 1868. The Californian Gold Rush Fever was in full swing in 1858, and when gold was discovered in the Fraser Valley, Victoria was where many eager Californian speculators landed. By the turn of the 20th Century, Victoria had become the busiest, most important port north ofSan Francisco.

With 50 departments and 250 employees, HBC boasted a state-ofthe- art heating and cooling system, Vancouver Island’s first escalator and elevator system, a formal restaurant, and a mezzanine-level library where customers could relax to the soothing melodies of a live orchestra. It became a gathering place where the elite could see and be seen.

Neighbourhood On the Move

For almost three quarters of a century, this iconic landmark was the focal point of Victoria’s growing retail scene. Over time, however, the store found itself too far from the burgeoning new retail activity around the city’s Inner Harbour. In 2003, the same year HBC turned 333 years old, the company moved to its current Government Street location leaving the original building vacant and facing an uncertain future.

Three years later, Townline purchased the entire site with a clear vision in mind — create a master-planned community that would return this iconic grand lady of retail to her former glory. Built with a “live local” philosophy as the cornerstone, it would also bring new energy and vitality to the entire neighbourhood. It was the beginning of the Hudson District.

Over the next four years, the beloved six-storey structure was passionately restored. The spectacular Georgian façade was retained and now enhances the site’s original heritage character. Inside, the building was transformed into 152, oneof- a-kind urban residences with a fresh, distinctly 21st Century vibe.

To address Victoria’s growing rental housing crisis, two purpose-built rental towers — Hudson Mews and Hudson Walk One — were introduced next, and within only three months of their release, both were fully leased. Now with the opening of Townline’s next rental mid-rise, Hudson Walk Two, Hudson District has added 404 muchneeded urban rental suites to Victoria’s rental stock. Hudson District’s efficient, welcoming design and walkable access to Victoria’s Old Town, Chinatown, and Theatre District, have already made the community popular with urbanites of all ages. From the Victoria Public Market at The Hudson with its farm-fresh, organic produce and artisan goods to the many quaint cafés, eclectic shops, access to transit as well as wellness and other essential services, the Hudson District is rapidly becoming known as “the place to be” for urbanites of all ages who embrace a vibrant, social lifestyle.

There are even plans for Yates Street Taphouse to open a 300-seat brewpub with 20+ craft beers at the base of Hudson Walk Two. Not your traditional pub, the ambiance promises to be fun, lively, and the perfect neighbourhood venue for casual gatherings —whether it’s before a concert or sporting event, as a special celebration, or simply for the fun of getting together and meeting new friends.

As Victoria continues to embrace its new role as a modern urban hub, a diverse demographic of young, enthusiastic professionals are discovering this is a city where they can live, work and play. Housing costs, while rising, are still more attractive than Vancouver — a positive consideration for young families who are ready to put down roots. In addition to the traditional industries of tourism and government, Victoria now identifies advanced education, research and development, ocean and marine sciences, IT, and entrepreneurial startups as key drivers in the City’s growing popularity.