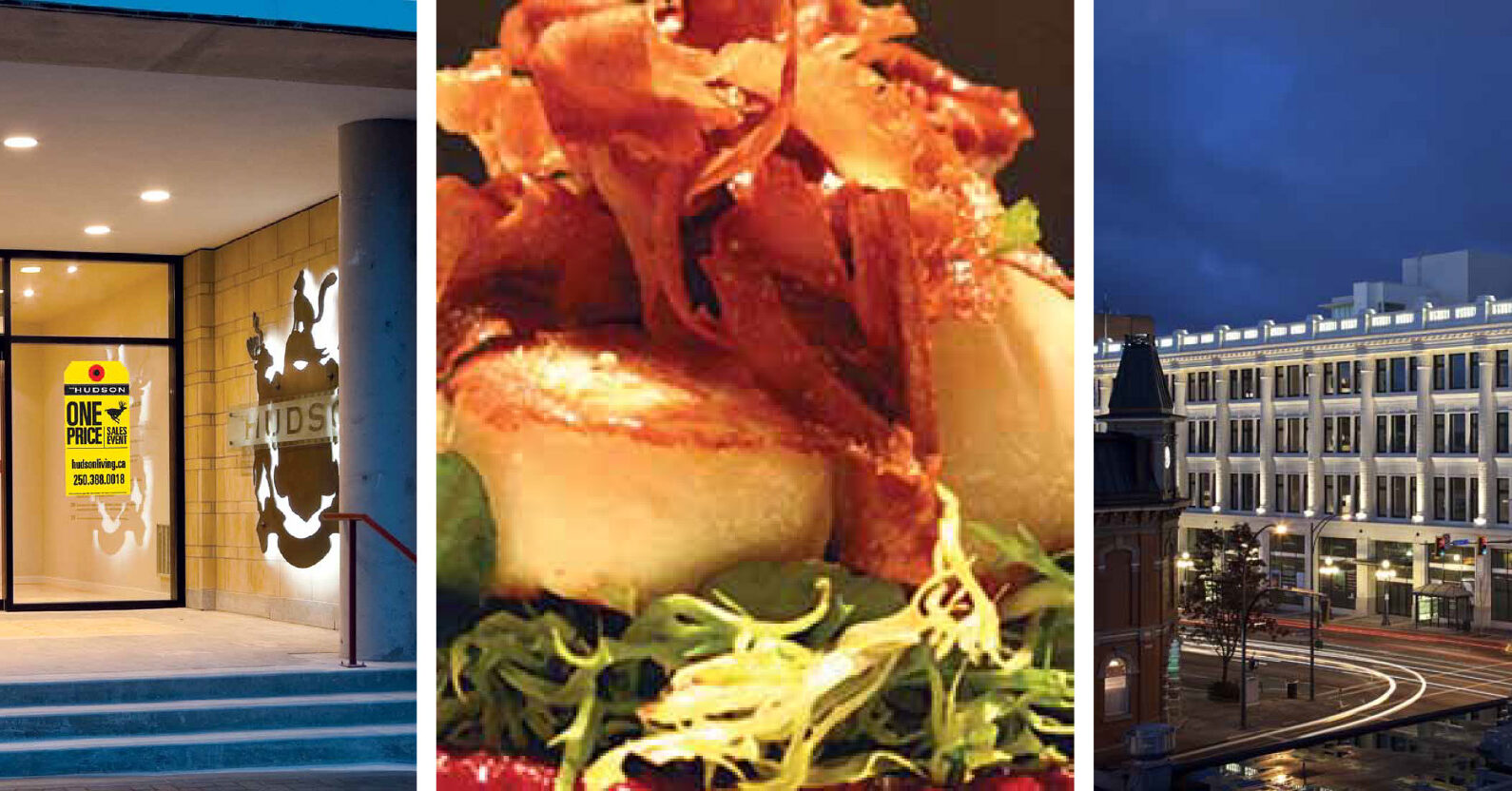 Brasserie L’ecole. The Mint. Zambri’s. Habit Coffee. Solstice Café. Chinatown. Oldtown. The Theatre District. Market Square. You name it. If it’s a downtown Victoria landmark or hot spot, you can walk there from The Hudson in less than 10 minutes.

And, to allow yourself the occasional culinary indulgence it’s nice to know that there are health and wellness centres close by. There’s Ashtanga Yoga Shala, Balance Victoria, Crystal Pool and Fitness Centre, and CrossFit Zone to name a few. Not to mention the great outdoor trails and paths from The Galloping Goose Trail in Vic West to the sea wall and pathways along Dallas Road.

Downtown Victoria is festooned with spas, nightclubs, restaurants and fabulous shopping tailored to meet the needs of locals and

tourists alike. You will be spoiled for choice…which is nice because you can dine out as often as you like and never get bored with what’s available right in your neighbourhood.

That’s one of the great things about moving into a new home in a fully matured neighbourhood. You don’t have to wait for the amenities and infrastructure to catch up to your needs like you would in the suburbs. It’s all here waiting for you the day you move in. A new home in an historic building set in a wonderfully rich community. The Hudson.

No, it’s not whiskers on kittens or bright woolen mittens… we’re talking about our favourite things at The Hudson. And, trust us, there are a lot of favourites to choose from.

It’s hard to imagine when you first step in to the Hudson that there is an amazing hidden gem to be discovered among the suites. It’s one of Tracy’s favourite things about The Hudson, the rooftop terrace, on the west side of the 5th floor. With sweeping views of the city and upper harbour it’s a great place to lounge and soak up the sun or bring a few friends over for a rooftop barbecue. She likes to picture herself in the near future, with a good book, in a comfy chair, taking it all in.

Mailo’s favourite thing about The Hudson is that upon entering the building you are met with its incredible sense of history. The lobby is imbued with the remnants of The Hudson’s past as one of the original 6 Hudson Bay Company retail stores. The timeline of its history, the original 1914 plans and entrance signage from the 1950s are all on display to the delight of owners and visitors alike.

During the deconstruction of this iconic Hudson’s Bay building, there were a few artefacts salvaged with a mind to re-using them as a nod to the origins of the building. As soon as you enter the lobby, it’s evident in the custom chandelier made up of a number of store lighting fixtures. Along the corridor to the elevator lobby, you will see a series of gauges from the old heating system boxed in acrylic. And then you come to Sara’s favourite thing – the illuminated Entrance to Store sign that once had a place in the parkade and now functions as a piece of modern art.

For Rick the list is vast, but the one thing that keeps coming to his mind is simply the opportunity to have had a hand in preserving a significant aspect of Canadiana. “Not only is this fabulous piece of architecture significant to Canada, it is even more significant to Victoria. After all, it was The Hudson Bay Company that was here first (second to the First Nations settlements, of course)”, says Rick. So in a way, Rick feels Townline’s contribution to the urban renewal of the north end of downtown Victoria – that he likes to call The Hudson District – couldn’t have been.