An Eye for Detail: An Interview with Principal of BAM 3D, Joe Fong

We’ve all seen images of real estate developments long before they’re actually built, and the level of detail is remarkable: sun glinting off placid water, brick that looks so real you can touch it. But it’s not real. Every element of these images is created by talented rendering artists like Joe Fong and his team at BAM 3D. We sat down with Joe to talk about how it’s done and how he became a master of rendering.

Let’s start at the beginning. How did you get interested in rendering?

As a child I was artistic, I liked to doodle and draw. My father ran a construction business, building homes around Vancouver in the ’80s and ’90s and I’d follow him to building sites. I wanted to do what he was doing, but not the hard labour! I wanted to draw it all, to design it. I thought I would become an architect —or an astronaut or film director. I took drafting in high school to understand what being an architect would be like, and I found that it could be a bit mundane. During that time Pixar movies were blowing up, which got me interested in computer graphics. After high school I went to a digital art school in Burnaby. I took animation, with the intent of working on those types of movies.

After I graduated, I worked for a big property developer in Hong Kong, then for an architecture firm there, doing their 3D renderings. At the time, architectural rendering wasn’t on my radar; I was into character animation and stuff like that. When I joined the architecture firm, I was their only artist, so I had free reign in how I portrayed a building.

I stayed in Hong Kong for around four more years, then I came back to Vancouver and worked as a project manager for a 3D rendering company, working with developers, architects and marketing teams. Eventually I branched out and started my own business, BAM 3D Inc, and that’s where I am now.

You started BAM 3D in 2016—how has your team and the company changed?

COVID has changed us a lot. The team used to maintain a core group of 10-12 artist but has since evolved to a more agile and sharper class. We still have an office and everything, but most of the team works from home now. It’s been a challenge being in a high-tech industry with powerful computers and energy consumption, but we’ve adapted. It’s quite different from the heyday of rendering farms in the office and lunch meetings! Now we have a lot of digital meetings. Cloud computing has pushed everything off-site.

How does the process of creating renderings work? Where do you start?

First, we need to know what the client is looking for. This gives us an idea of what we need to build a rendering of. We get construction drawings from the architect—floor plans, elevations, etc.—which help us see the whole design and its measurements. We convert the 2D drawings into 3D objects inside a program called 3ds Max. At this point the buildings look like wire-framed structures, then grey objects, almost like clay models.

We set up ‘views’ inside the digital scene to capture different angles and perspectives, just like a camera in real life. We use the same settings even: aperture, shutter, ISO. We try to mimic what photographers do and what a human eye sees to get the most realistic image possible.

Once we have approval on the views we want to capture, we colour the digital model and apply textures to surfaces. It’s like wrapping paper. Let’s say you have a brick façade: we may take a photo of real brick, adjust it in Photoshop, then apply it in the digital model. We do this for every object and surface—metal, wood, shingles, etc. Then we add physical objects, like lights and trees. The rise of computing power has really pushed our abilities to visualize these things in incredible detail.

After several rounds of refinements and approval from the client, the image gets rendered, which can take hours to sometimes days on very large and complex scenes. Once that’s finished, we bring it into post-production for touch-ups using Photoshop.

What other hardware and software do you need to do this type of work?

When we first started, you needed a top-of-the-line system to compete. Photo editing systems need a lot of RAM, and producing the final images requires computer processing power. Now we’re shifting to cloud computing and cloud rendering. You don’t have to rely on physical hardware, as long as you can do the design and detail work. You send the material to cloud-based companies to do the actual rendering of the images. But of course, we still need powerful computers to do some things ourselves in real time.

What is it like to see a finished building that you created renderings of?

In the beginning I was so excited, I would tell everyone, ‘I did that!’ You feel so proud. Nowadays I start evaluating the end product compared to how I interpreted it. Sometimes it’s very close and sometimes it’s a little different in person. I guess the perfectionist in me is like, we can do better. Every time I see a finished project I want to think, ‘We nailed it.’

The steps to create realistic renderings

Joe and the team at BAM 3D meet with the developer to understand their vision for the project. They collect architectural drawings, site and landscaping plans and other materials.

BAM starts building a three-dimensional digital model in a program called 3ds Max. They set up views in the model, almost like you would place a camera.

The structure and shape of the building(s) continues to be refined to match the architectural plans. Certain reflective surfaces are added to the digital model: sky, roads and glass.

With the views confirmed, BAM begins to add colours, textures and materials to match the design specifications, carefully considering how light reflects off each surface.

The details continue to be refined to bring the rendering to life. When everyone is happy, the 3D views are rendered using high-powered computer processing to generate final 2D images.

A photo of the completed community. It’s a slightly different angle, but the details are remarkably close to the renderings. 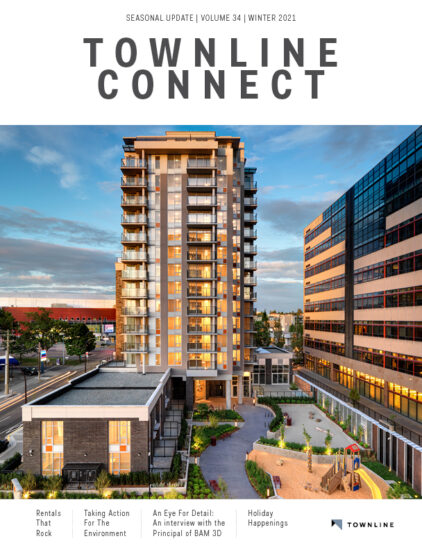 Rentals That Rock
Taking Action for the Environment
An Eye for Detail: An Interview with Principal of BAM 3D, Joe Fong